The quest for the “deal” or unknown windfall resides deep within all of us! We can’t seem to help ourselves, but when a surprise “find” occurs by accident through product unawareness or by pure blind luck, the pleasure is all the more sweet! Antiques Roadshow can attest to that!

I love this story from a former student who wanted to show me a particular bead necklace. Having recently retired from the medical industry, he happened to be scouring garage sales when he saw a bead necklace in a Reicker mount. Curious, he inquired about necklace, with the seller indicating that it was a fertility necklace. What a humorous gift to give to his son and daughter-in-law, NOT looking to bear children, but he being a hopeful grandparent… well, you know the story. “How much?” he queried. “Two fifty” said the seller. “Two hundred fifty dollars, a bit too much for a gag gift” he thought and he politely passed on the purchase. He heard the exasperated seller tell her friend/helper “who wouldn’t buy something for two dollars and fifty cents?!?” He said “oh, I’ll buy it for that, I misunderstood you!”  Looking in his wallet, he only had two dollars, to which the vendor said “Oh, ok”, just take it!” Before passing the necklace on to his “childless by choice” kids, he decided to do a little research and that research led him to me.

Hearing a little of the story over the phone, I expected to see something average, having possibly little value, but what he brought made my jaw drop! “Oh my gosh, you have chevron beads!” I said. These particular beads are a Venetian invention from the late 1400’s and one of the first trade items exported by the Europeans. The Venetians call this cylindrical or barrel shaped bead the rosetta bead; it was the Americans who later called them “chevron” beads. Some scholars suggest that the rosetta bead refers to the bead before the ends have been ground down to reveal the zigzag pattern on either end and they become a chevron bead once the ends have been ground. The zigzag pattern is produced by layer after layer of different colored molten glass, each plunged into a consecutively larger “star” mold.  Regardless of whether you call it a rosetta bead or a chevron bead, this is a very interesting and pedigreed bead. It is found in both Americas as well as in Africa and Asia.

The oldest chevron beads have seven layers, with the innermost glass layer, (at the aperture or hole), being a transparent greenish blue color. The layers are counted from the inside outwards. The early seven layer chevrons arrived in Africa by the 1500’s and became so highly cherished that they became the property of the chief or tribal leader, and worn only by them. Seven layer chevrons vary in price from $150 to $3,600 per bead, depending upon size and condition. Three to five layer chevron beads were the next to be produced from the 1600’s to 1800’s. Four to six layer chevron beads were produced in the early 1800’s into the early 1900’s, for trade with the new colonies. The most common chevron beads in North America and what we most encounter are the four and six layer beads. The strand that my student has is composed of twenty-six beads: twelve having four layers and fourteen with six layers. The beads in the strand graduate in sizes from 12.75mm wide x 19.0mm long to 24.0mm x 33.5mm long! As these four and six layered chevrons are more common than the older three, five and seven layer beads, they are less expensive. Current (spring 2015) prices for most four to six layer chevron beads range from $10.00 to $50.00 per bead, depending upon condition and size. At an average of $30.00 per bead, this strand has a value of close to $800.00! Not bad for a $2.00 investment! Needless to say, he was tickled with the news. Had this strand consisted of seven layer beads, the value could have been ten times more!

He attempted to gift the strand to his kids, but they wanted none of it and did not even want to touch them for fear of some fertility power overriding their current form of birth control! I personally had never heard of chevron beads being used for fertility, nor have I found anything to document that use. But, one never knows! As for the beads, he enjoyed learning about them and now he looks forward to monetizing his investment! 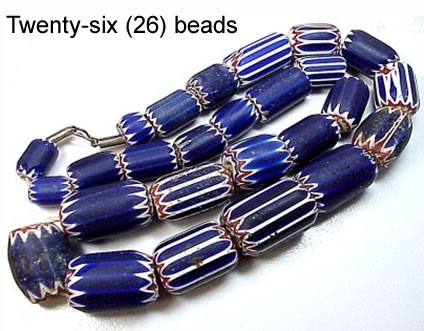 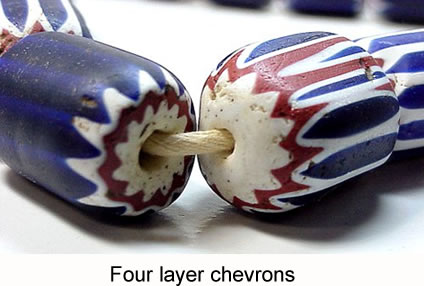 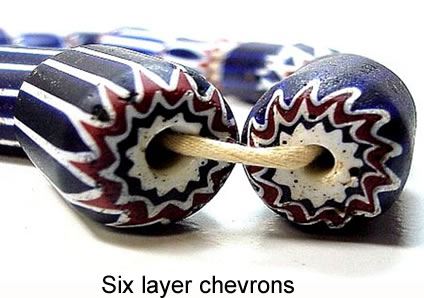