Sarah scheduled some time with me to work for her to become more proficient in using gemological equipment, as she is going through her GIA homestudy course work. Knowing my proclivity for beads, she told me that before we began, she wanted to show me something. She slipped a ring from her finger, saying that it was her mother’s ring but had recently been given to her.

My eyes widened and in an uncharacteristically aggressive mode, I snatched it from her. Her eyes widened and once in my clutches, I looked at her exclaiming “do you know what you have here?” “Well”, she said, “my Mom said that she got it from her sister who purchased it in Egypt.” 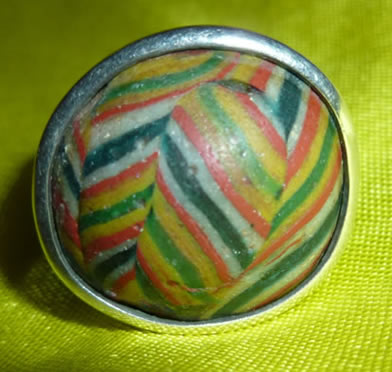 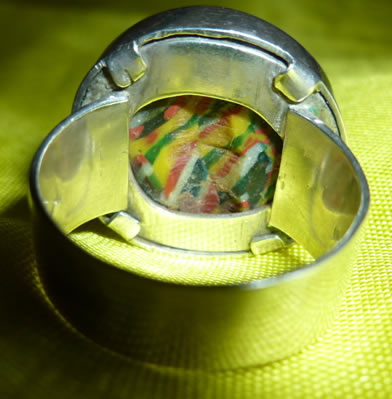 “Yes!”, I said, “This bead is from Egypt. What else do you know?” “Nothing really,” she replied. It was then that I began ranting about the fact that this bead was probably made in pre-Cairo, Egypt, possibly in the ancient bead making town of Fustat, Egypt. As a young Cairo grew, Fustat remained on the outskirts, as bead making centers require high heat produced by kilns and furnaces and fires were always a threat. “This is a famous bead to bead scholars, as it only existed for a relatively small amount of time and ended up being so highly coveted by the people to whom it traveled through trade, that it acquired a highly magical status! Please, please, leave this ring with me for a short time while I photograph it. In exchange, I will bring you books showing pictures of your particular bead as well as greater details.” I was so relieved when she obliged, as I was not sure that at that moment, I could hand it back!

Her bead, called “Morfia/Mourfia” could have been made in Fustat, Egypt around circa 900 to 1100 A.D, however this bead has been found as early as 400 to 500 A.D. It is one of few beads made by a fused rod or rolled pad technique. For simplicity, imagine placing strips of thin colored rods, side by side and melting them together. Then heat and roll out the fused section with a rolling pin (not really, but good imagery.) Then slice this into strips, placing one strip next to another, with the direction of the rods going in opposite directions, resulting in a zigzag effect. Heat them, fusing the strips together and while hot, roll them up around a mandrel or bar. Allow them to cool, remove them from the mandrel and voila… a fused rod bead. Looking at the photograph, you can see the lines of demarcation between the slices and the back view (previously the inside of the bead perforation before it was broken) indicates that the slices were fairly thick. A very labor intensive process which created a wonderful visual effect!

As mentioned, this bead was believed to have very magical properties, whether as an amulet meant to keep bad away from it’s owner, or as a talisman, intending to draw positive things to the owner. So powerful was the magic contained within this bead, that even if the bead broke, the power was not mitigated. As such, broken pieces could be distributed to family members to protect and/or aid them. Sarah’s ring was made from a half bead, bezel set and open in back so the bead’s power could “interface” with it’s owner.

“A rare relic of past conquered and eradicated civilizations, present day samples are usually found in soils as surface finds, archaeological digs and unfortunate looting in few regions of the world: especially along the salt routes of northern Africa and documented in Mali.” Middle Eastern and Venetian Glass Beads, Augusto Panini.

So coveted was this bead and/or the oral tradition surrounding this bead, that when a newer bead resembling morfia, called kiffa, was first described in 1949, scholars believed that the morfia might have been (and probably was) the inspiration. The kiffa bead is named after the town of manufacture, Kiffa in Mauritania. It is made only by women in Mauritania, by a completely different technique called the powder glass technique. Older kiffa beads are now rare and highly coveted by bead collectors. Often desirable objects having a limited supply will rise in status, accompanied by a rise in value and imitations. Copies of the Mauritanian kiffa beads are now being made in Indonesia. And so it goes.

I still had a hard time returning this ring to Sarah, but enjoyed telling her it’s rich story and showing her pictures of extant samples and placement within a human timeline for reference.

For me, this bead glowed! All I could think was: “WOW! It took 1,000 years and 7,500 miles (plus or minus) to reach me!” The magic within that bead touched me, thrilled me and left me feeling immensely lucky to have had possession of it, if not just for a short time.

Postscript: One week after this fortuitous encounter, I received the November issue of Ornament magazine, in which an article on Islamic Glass pays tribute to, including a short discussion on this special bead.

Second postscript: New research suggests that “this bead might be the invention and production of Syrian beadmakers rather than the product of al-Fustat, Egypt”. Jurgen Busch. Ornament magazine 36.2, 2012.