A charming client, Lu, showed me a heavy pendant which measured 7/8″ wide x 1-1/4″ long and featured an egg shaped, whitish object wrapped in a handmade, high karat yellow gold setting. I mention heavy, as Lu jokingly said that she had to be careful when wearing it, as one time it nearly knocked her front teeth out when she bent forward.

Notice vertical grooves, horizontal growth banding and the brownish
patch on one side.

Visual observation showed very shallow ridges, vertically aligned around the whitish “egg” and slight color variation growth patterns running horizontally. There was a small brownish spot on one side of the “egg”.

As I examined Lu’s pendant, she told me what little history she could about it. When living in Sulawesi, Indonesia, a friend of hers owned and would often wear this pendant. When she did, Lu was held captive, unable to take her eyes off the piece! Her friend explained that it was a true rarity of nature and as such, is believed to bring luck and protect its wearer from negative influences. “She told me that it was a “coconut pearl.” Lu said, “Have you ever seen another one?”

My eyebrows lifted and I responded, “No, but I have heard of them.” During my involvement with The Bead Museum, Arizona (sadly closed but the collection was adopted by the Mingei International Museum in San Diego, California,) I became very familiar with the use of amulets and talismans as one of the more significant functions of adornment, be it for humans, their animals, or inanimate objects. For edification, the word amulet generally refers to something that is believed to keep bad away (think evil eye jewelry and even the color blue is believed to have this attribute,) whereas a talisman could bring good to you, as a lucky charm for health and/or wealth.

Even though there was quite a bit of gold on the pendant, I had trouble believing that a coconut pearl would be so heavy. The linear grooves on the “egg” resembled a particular bead that I was familiar with, which is fashioned into rectangular shapes and off handedly called “hippo’s teeth”. Though they resemble what might be hippo’s teeth (not that I have had personal knowledge), these “hippo’s teeth” beads are actually shell. As shell is calcium carbonate and the inner section of a coconut is a cellular, fatty compound, a simple acid test should provide evidence whether or not the “pearl” was shell. Indeed, the effervescent result confirmed the shell identity.

Several other “coconut pearls” have been scientifically analyzed and determined to be made from the giant clam shell (genus Tridacna) or Indo Pacific clam (Hippopus) shell. Stories and misrepresentations surround the fabled “coconut pearl” along with healthy asking prices. In an interesting article written by botanist professor W.P. Armstrong, Palomar University¹ (last updated February 21, 2012), he tells of an “alleged coconut pearl within the endocarp of a coconut that was offered to him in 2003 for $60,000.00!”

Ah, the fun of being a sleuth and as usual, buyer beware! 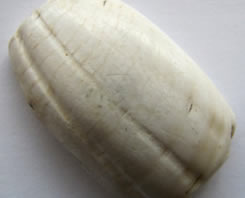 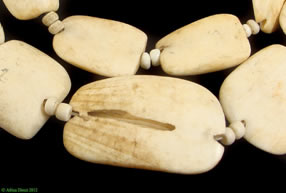 “This west African made bead is cut from the shell of the arca clam. These large white heavy rectangular beads are also called hippo teeth.” They are not. The arca shell is a marine clam that lives in shallow warm water.

Exactly where these beads are made is not known by this writer. They are used from Senegal to Cameroon. (Liu 1976>6b.)

The enterprising Czechs came to West Africa to observe what beads were popular there in the 1800’s. They took examples of these beads back to the bead makers in Bohemia where they were copied in white glass. This made life much easier for the native shell bead fabricators.”