Be it extraordinary, odd or fascinating, the many shows which constitute the Tucson gem, mineral and fossil shows, deliver! Most years, the extraordinary can be witnessed while walking down any one of the many aisles of the AGTA or GJX shows. Rare, natural wonders not only catch the eye but often deliver an unexpected endorphin jolt. This year was no exception showcasing wonderful examples of Paraibas, Padparadshahs, Trapiches, oh my!

Outstanding mineral specimens with equally outstanding prices were awe-inspiring, but what really caught my attention this year? Three items in particular tickled my sense of wonder.

First, I was struck by the quantity of pre-Columbian artifacts that I saw at the Ethnographic Group Show at the Grand Luxe Hotel (previously the Rodeway). A large private collection of artifacts had been made available for sale this year, one of which was a rarely seen, inverted “T” shaped, broadwing stone breastplate/pendant, wholesaling around $1,500. It is suggested that these pendants may be stylized representations of the bat.

These volcanic stone pendants, measuring approximately ¾-1″ x 5-3/4-6″ long, are attributed to the Tairona culture of northern Colombia (AD 800-1500). Elegant, elongated chalcedony beads with flared ends were also fashioned by the skilled Tairona jewelry artisans. I was unwittingly “on trend” this year, having worn two pre-Columbian rock crystal bead necklaces: one necklace of one larger and several smaller cylinder shaped beads and another necklace of barrel shaped rock crystal beads, the first Tairona, dating AD 1000 to 1100, the second (photo) are Mochica, N. Peru, AD 100-800. The aesthetic appeal of these quartz beads lies with the visible biconal drill holes, the result of having being drilled from either side by a stone drill and abrasive slurry. The labor involved in the production of these beads and other jewelry artifacts is significant.

The oddest artifact was another pre-Columbian artifact in the possession of a dealer in one of the hotel rooms: a jade tooth. This jade tooth was unfortunately broken vertically, otherwise the price would have been higher than the $150 price tag offered to me. Admittedly tempted, I reconsidered as I had just been to the dentist and having received a good report, was not currently in need of an ancient, albeit tougher, replacement. Those interested in archaeology might have heard recent reports confirming that the ancient quarry and source of forty-three (43) bluestones of Stonehenge had been found.

Two photos of jade used in teeth, exhibited at the Jades, S.A. Guatemala museum.
The piece that I saw was an entire tooth split vertically in half.

The quarry in the Preseli Hills of west Wales, approximately 150 miles away, made the 3000 BC accomplishment of moving the stones quite noteworthy! Also noteworthy and intriguing, was the presence of some of the Preseli bluestone transformed into jewelry and other artifacts and made available for sale in Tucson, Arizona! I could not resist. I purchased a stretchy bead bracelet and in doing so cemented my connection to this ancient wonder! I felt giddy.

On another note, those who attended my lecture at the 2015 NAJA Tucson conference on “Estate Exotics: Collectible Beads”, might recall having seen a sizeable ( 3-1/2” long x 23.5mm diameter) cylindrical “chung dZi” bead, strung into a necklace with other chung-dZi beads, during the hands-on session. Wearing the necklace this year, prior to exhibiting it in the Commercial Mineral Co. (CMC) booth at the AGTA, I received more attention than I would ever have anticipated. Three separate Tibetan groups followed me ar 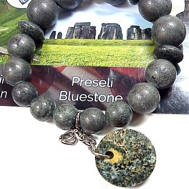 ound inquiring “how much?” Only one other large chung dZi bead like mine has been for sale during past years at Tucson or other shows that I have attended around the country. The “other” bead, though slightly larger than mine, has gone up in price from $10,000 a few years ago to $35,000 this year! With no plans to sell my bead this year and pursued by dogged queries, I assigned a $25,000 price to my bead and took the cards from all three potential buyers. I have not yet followed up.