The amalgamated Tucson show hunt always bears fruit for the information and product seeker, the future trend detective as well as those looking for what’s new in the marketplace. This year satisfied all.

New product or with a greater presence this year: (all prices are wholesale)

I spent some time with a top coral and turquoise manufacturer who shared invaluable information regarding the coral market. Most of us are aware that coral values have been going up steadily for years, but prices for Pacific coral have increased significantly more than Italian or Sardinian coral. The main reason for the price differential is that Pacific coral, which encompasses material from Taiwan, Japan and the South Seas, is no longer being produced. Larger beads, carvings and all the pale shades of coral are Pacific corals. Pacific coral branches grow in larger diameters than the Italian or Sardinian material, which rarely produces beads larger than 8.5mm to 9.0mm. Italian coral is generally in medium to darker red orange shades. Many of the salmon and orangy-red Pacific corals have diagnostic white colored channels and/or spots. The greater number of white spots, surface pits and baroque shapes lessen the value. An example he gave was for higher quality coral with no holes or spots: Pacific material would bring $200/gram whereas Italian might only bring $60-80/gram. Second quality Pacific coral with some holes and/or white spots can drop down to $20/gram! A rare, very dark orangy-red Japanese material, which takes a very high polish, is fetching $2,000 to $3,000/gram, which could equate to a $300,000 to $400,000 necklace! This gemmy coral is regulated, protecting it’s rare status!

Those who appraise turquoise are already familiar with the recent past closure of the Arizona Sleeping Beauty turquoise mine, which produced some of the most coveted colored turquoise on the globe. The closure has resulted in increasingly higher prices. A new Arizona turquoise, being called Bluebird turquoise, is being touted as the next Sleeping Beauty due to the color similarity. Matt Foutz, involved in the production and marketing of this material, has suggested that the material will be available soon, limited in stone size but should supply the market for years to come.

As for the famed dZi bead that I wrote about in last year’s review, this year I heard of a four-eyed dZi bead sold that for $28,000. Another ¾” long bead in the dZi family with a netted pattern single bead, called a “phum” dZi, increased in price from $5,000 last year to $6,500 this year.

While in the Middle East last year researching a particular form of ancient jewelry, on which I plan a future talk, I smelled something extraordinary. Not once, but several times, my head followed my nose in the direction of well coiffed Middle Eastern businessmen in traditional starched white attire. Later enquiring about this scent while visiting an Egyptian perfumery, our helpful proprietor laughed and said “oh, you must be smelling oud!” Oud or ouhd, is a fragrance emitted from a Southeast Asian agar or aquilaria tree. It is the most expensive fragrance known, selling for $200/dram (1/8 oz. or 3.69 ml). Since antiquity, Egypt has been where scents are purified and distilled into oils which are then purchased by the large cosmetic and perfume lines with names you would easily recognize. Over the past year, I have noticed oud fragrance combinations from many big name perfumeries in local department stores. What does this have to do with jewelry and gemology? At Tucson, I witnessed bead bracelets and necklaces as well as unfinished chunks of agarwood for sale. The wood can vary in fragrance, with strongly aromatic wood fetching thousands of dollars for a simple bead bracelet, to minor fragrance emitters starting at $100.00 on up. It appears that the Chinese market has picked up the Middle East infatuation with agarwood and brought that infatuation to Tucson. I don’t know about you, but this is a new trend that my nose welcomes! 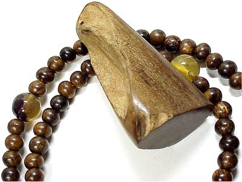